Senator Manchin - What Help to Working West Virginians do YOU Want to Take Away? 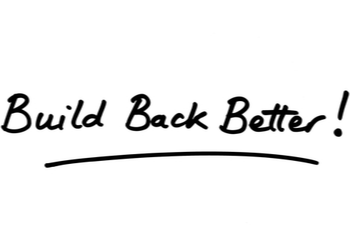 I believe in democracy and that elected officials are beholden to their constituents.  When I am really excited about something going on in Congress, I let my federal representatives know where I stand. My momma taught me that educated engagement is real patriotism.

Most recently, I wrote our U.S. Senators to express my support of the Build Back Better legislation now being debated in Congress.  This package of bills will make investments in programs that help working folks to address barriers to work and opportunity that go back generations in our state and rise larger every year.

Here is an excerpt from Joe’s response:

At a time of intense political and policy divisions, it would serve us well to remember that members of Congress swear allegiance to this nation and fidelity to its Constitution, not to a political party. By placing a strategic pause on this $3.5 trillion package, by significantly reducing the size of any possible reconciliation bill to only what America can afford and needs to spend, we can and will build a better and stronger nation for all our families.

First, Joe is telling me that he is willing to vote with Republicans.  This is a hallmark of our Senator’s brand; and I am glad that he tries to look at policies, not just follow his party blindly.  Ok.

Second, Joe suggests that Build Back Better should be no larger than “what American can afford and needs to spend.”  I’d like to address this gauntlet that Joe has thrown down. And ask for some clarity.

Unlike the large tax cuts enacted in 2017, Build Back Better would add little to the deficit because it pays for nearly all new investments, largely by requiring very wealthy households and corporations to pay a fairer amount of tax. Build Back Better further pays for itself by reducing the cost that the government (think Medicare) and consumers pay for prescription drugs by freeing the government to negotiate to secure lower drug prices from highly profitable drug companies.

So, Joe - I would like to challenge you to move from vague statements that the bill is “too big” and tell West Virginia voters exactly what you would cut from the package.  And which tax loopholes for billionaires and corporations you think should be left open.  Because the only reason you need to cut programs that help working families is to protect these tax loopholes.

This debate is about you choosing between the needs of hard-working West Virginia families or tax breaks for the obscenely wealthy.

So, Joe – what do you specifically want to cut from the package? Exactly what help to working West Virginia families do you want to erase?

The cost of these supports for West Virginia families (and others not listed) will be offset by making wealthy people pay a fairer amount of tax, stemming the tide of profitable corporations shifting profits to overseas tax havens, and securing savings from drug companies by reducing prescription drug prices.

And to be clear, under the current proposal, wealthy households would still be able to shield large amounts of their income from taxation.  In fact, Congress could strengthen the current Build Back Better tax proposals to make the federal tax code even more fair and raise additional revenue to invest in the working folks who are the backbone of our nation.

So, Joe – Tell us clearly what you will cut – what help do you think working West Virginia families don’t need?

And, Joe – West Virginia voters will clearly answer back at the ballot box.