This is so frigging exciting! 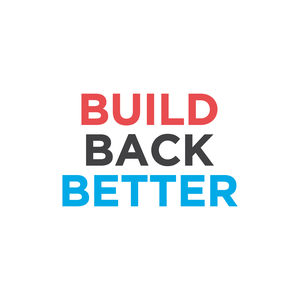 President Biden’s Build Back Better has taken a step forward from campaign vision to reality.

This week the Senate will vote on what is basically the framework of President Biden’s Build Back Better plan.  Released this week is a draft of the $3.5 trillion Budget Resolution that will shape the Budget Reconciliation package of legislation.  The Budget Resolution contains many proposed initiatives and programs that will help working families in West Virginia and across the nation.  The Budget Reconciliation legislative package - sometimes called “the spending bill” - is where the details of exactly how the $3.5 Trillion will be spent are worked out.

Many commentators in the media have said that this budget is the largest, most comprehensive package of programs to help working families since Roosevelt’s New Deal. Seriously.

The Budget Resolution includes an amazing set of what some call “soft infrastructure” investments:

Here are links to the full Build Back Better Budget Resolution.  It is FUN reading in my humble opinion.  Don’t have time for a lot of fun – then just check out the summary.  I think the “Details” is as sweet as cherry cheesecake.

Again, this is just the first step toward making the vision a reality.  After the Budget Resolution is passed this week, the Senate and House Committees will begin to draft legislation within this framework that eventually comes together in a final Budget Reconciliation package of legislation.

This budget process is a special one that allows the final package to pass in the Senate by only 51 votes instead of the usual 60 votes required.  That means that the package can pass if every Democrat plus Vice-President Harris (who provides the tie-breaker vote in the Senate) support the package.  Republicans can influence the process and final package, but they can’t derail it unless they recruit moderate Democrats to stand with them.

I doubt we will see a final package and formal vote until the end of the year.  I would not be shocked if it even slipped to next year.  Frankly, it will be a long slog for those of us who want to see the vision laid out by President Biden become reality.  And a roller coaster ride of ups and downs as we fight to see the best possible package of legislation move forward.

Also, I should note that the Senate just passed the Infrastructure Investment and Jobs Act -- (good National Law Review summary here) bipartisan bill that will support a once-in-a-generation investment in our nation’s roads and bridges, public transit, high-speed internet, clean energy and drinking water.  Now, this “hard infrastructure” legislation will go to the House for a final vote before President Biden signs it into law.  Rumors have it that House Speaker Pelosi might decide that this hard infrastructure bill - that many moderate Democrats and Republicans strongly support – should be placed on hold until the Budget Reconciliation package is ready.  Think of it as an insurance policy that will keep all the Democrats working together on the so-called “soft infrastructure” issues.  We shall see what happens.

And here’s the final note.

West Virginians for Affordable Health Care will be calling on you many times over the course of the rest of 2021 to help us send a message about our priorities to all in our Congressional Delegation, and especially to Senator Manchin.  We know that ask after ask can get tiresome.  But we also know that you care.  So please hang in there with us and send emails and make phone calls when you can.

This is the opportunity to make historic advances for working families.  Stay tuned.

And celebrate with us that we are fighting for real progress now – not just fighting off those who would move us backward.