Sen. Joe Manchin wants to restrict who gets the child tax credit. These West Virginians would be affected if he prevails.

Manchin supports new requirements for the expanded child tax credit that would likely end the benefit for thousands of families in his state. 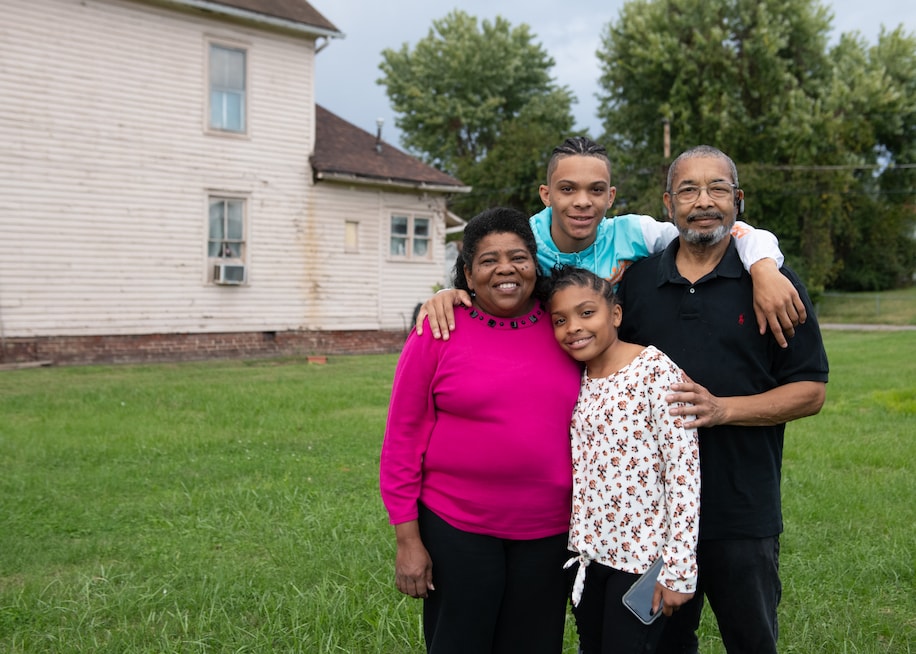 Ruth Jones, left, and husband James Jones, right, pose for a portrait with grandchildren Ayricah Clark, 10, and Nilique Jones, 17, near their home in Charleston, W.Va., on Oct. 21. The Joneses, both in their early 60s, are raising their grandchildren. (Lexi Browning for The Washington Post)

They are raising two grandchildren, ages 10 and 17, on a limited income — James’s part-time earnings as an Applebee’s cook and Ruth’s Social Security payments. Like thousands of other West Virginians, their financial burden has been eased since July by monthly federal payments, championed by the Biden administration, to support families with children. Now, however, those funds — which total $500 a month — could vanish if lawmakers agree to the demands of their own U.S. senator, Joe Manchin III.

Appearing on CNN in September, the moderate Democrat from West Virginia implied that he would not support extending the monthly payments, which come in the form of an expanded child tax credit (CTC), without changes. “There’s no work requirements whatsoever,” he said. “There’s no education requirements whatsoever for better skill sets. Don’t you think, if we’re going to help the children, that the people should make some effort?”

Then on Oct. 17, Axios reported that Manchin also wanted to restrict the program to families with incomes of about $60,000 or less. If he prevails, it would most likely mean the end of those payments for James and Ruth.

“We want Manchin to take a little bit more active role in protecting us as far as West Virginians,” James, 64, said from his chair. “We’re not a bunch of deadbeats. We work for a living and we’re due.”

A spokeswoman for Manchin did not respond to requests for comment, including when asked about what specific requirements the senator would like to see in exchange for his support for continuing the expanded payments.

In West Virginia, 170,000 children became newly eligible under the tax credit expansion, which was included in Biden’s $1.9 trillion stimulus package passed in March. The changes to the tax credit raised the maximum benefit from $2,000 to $3,600 per child per year and dramatically expanded the share of poor families receiving the credit. In July, the food insecurity rate in West Virginia households with children dropped from 11.6 percent to 8.4 percent, and in September a survey found 86 percent of West Virginians felt the payments had made a “huge difference.”

In interviews, families across the state said they used the money for essentials and small luxuries: new clothes for growing middle-schoolers, firewood to heat a home in the coming winter, pumpkins and a cheery scarecrow to mark the fall season, a 3-year-old’s class pictures. But now, advocates for the poor caution that Manchin’s requirements could have an impact on thousands of households, from parents grappling with expensive child care, to families earning over $60,000 but still struggling, to grandparents who are raising grandchildren but aren’t able to reenter the workforce.

“It takes everything out of us just to make sure these children are fed and taken care of and clothed,” said Ruth, 61. “We’ve been taking care of the children on our own dime.”

The future of the expanded child tax credit remains unclear as negotiations continue over the White House’s package of far-reaching social programs. Biden has signaled that he will resist attaching work requirements to the program.

For the Joneses, the cloakroom discussions and cable news debates playing out on television only seem to spotlight the gulf between their family and policymakers.

“The struggle is real,” James said. “These are not just numbers, these are people.”

As the payments hit bank accounts in July, the benefit reached an estimated 60 million children in 39 million households across the country.

A team of researchers from Columbia University determined that the first round lifted 3 million children out of poverty and that if all eligible children had access to the payments, child poverty would be reduced by 40 percent.

The Center on Budget and Policy Priorities estimates that in West Virginia, 93 percent of children would benefit from a permanent expansion of the credit.

“For some of our clients, this is keeping them above water right now,” said Beth Zarate, president and chief executive of Catholic Charities West Virginia. “West Virginia just has so many challenges. We struggle with jobs, we struggle with our people leaving our state for other jobs. So the Child Tax Credit has been huge.”

But even as the program’s benefits were registering in West Virginia, Manchin expressed concern over what he saw as an overly lax social program available to too many. Fortifying Manchin’s criticism was a recent study from the University of Chicago finding that roughly 1.5 million workers would quit the labor market under the Biden plan.

Proponents of the plan counter that an expanded CTC offers a unique chance to combat poverty and say children should not be cut off from resources because of their parents’ circumstances.

“The opportunity to cut child poverty in half in West Virginia is one that we have to take and imposing a work requirement basically neutralizes that benefit right out the gate,” said Seth DiStefano, policy outreach director at the West Virginia Center on Budget and Policy, a nonpartisan research organization. “Let’s be clear: Parenting is working, raising kids is work.”

Relative to other states, large numbers of West Virginia grandparents are raising their grandchildren — a partial legacy of the opioid pandemic that tore through Appalachia.

For that demographic, including James and Ruth Jones, the idea of rushing into the job market seems like an insurmountable barrier. “It’s hard to get a job at this age,” Ruth said.

Neither Ruth nor James feels capable of returning full time to the workforce. Ruth has multiple sclerosis and receives about $1,300 each month from Social Security. Before retiring for health reasons, she worked for a Charleston hospital for 36 years. James’s part-time work as a cook earns him about $1,400 a month, but he can’t work more because he has to take care of his elderly mother, who lives nearby.

The $500 monthly payments have helped with household repairs and senior pictures for their grandson, the couple said. In the past, to make sure the children had what they needed, Ruth had to forgo buying medicine to treat her MS, she said.

Despite her ailments, Ruth’s days start at 6 a.m., with the neighborhood outside her window still wrapped in darkness. One recent October morning, she coaxed her granddaughter Ayricah awake and packed snacks while the local news played on television. With a black marker she wrote, “Have a great day,” on the clear plastic bag before reminding the girl to take a mask for school.

Before leaving, Ayricah silently showed Ruth one of her graded assignments.

“100 percent? Very good!” Ruth replied. “Share some of those smarts with your granny.”

A penalty for stay-home parents

Mali Gank and her husband, Cris, who live in a small town in West Virginia’s rural northeast, have gotten by on her teacher’s salary for the past three years, ever since Cris, 47, was laid off from his manufacturing job. They have a 3-year-old son and infant twins, born in February.
Mali, 43, has learned to budget “to the penny,” creating spreadsheets that lay out an entire year of expenses. The first credit hitting their bank account this summer felt like “relief,” she said.

They used the money to stockpile truckloads of firewood — enough to feed the family’s wood-burning stove through the winter. The temperature inside the home can get to 90 degrees or higher when the fire is going, but it’s the most economical way the family has found to keep warm in a state where electricity prices can fluctuate wildly in the winter.

They’ve also managed to get ahead on car repairs, a constant worry when contending with the area’s often-rough, potholed roads.

Depending on how strict a work requirement Manchin succeeds in imposing, and whether it would apply to both parents, the couple may be at risk of losing access to the expanded credit.

If Cris were to work, his income would probably put them over the $60,000 threshold, even though most, if not all, of the extra money would go toward paying for child care.

Right now, Cris cares for the twin boys while Mali teaches. When she did try to find licensed child care in their rural area, she was quoted a price of $1,300 per month at a day care an hour away.

Jess Greenlief, 38, is the executive director of a family basic needs pantry in Gilmer County, a rural region in central West Virginia where the poverty rate is 25.5 percent.

With a 1-year-old son and an 11-year-old daughter, Greenlief was both a recipient of the payments as well as a witness to their impact on clients coming through her pantry door.

“It takes close to an hour to get anywhere important,” she said. “A lot of the resources that typically are available elsewhere don’t trickle down to us. Many of our jobs are related to the gas and oil industry, and a lot of those jobs are on hold right now or are out of state.”

Greenlief used her $550 monthly payments for school clothes and car repairs — a necessity in an area with limited public transportation options.

Often she works with families that are fully employed, making more than the proposed $60,000 income cap but still unable to meet their daily needs, she said.

“What we see a lot of are upper-class poor,” Greenlief said. “These are individuals who make too much money for programmatic support, but they are still struggling on the whole.”

Greenlief said that she often sees families where one or both parents are “working to survive” — meaning rent, food and utilities swallow up their salaries, leaving little to spare. That’s when they show up at Greenlief’s pantry looking for basics such as baby formula, laundry detergent or personal hygiene products.

For this group, the expanded payments have also been critical, she said.

“The families that I’ve been working with over the past several years, they have not had to come back to see me after the CTC,” she said.