Medicaid can be life-changing for West Virginians

Today, we share the story of Donna and Todd from Kearneysville, West Virginia.  Every story helps us show policy-makers how important Medicaid is to our families, and that is key to fighting to keep and improve Medicaid in West Virginia.

Do you have a Medicaid story to share? Connect with our storyteller, Mariah Plante, to arrange a time to talk about your experiences and how your story can become a powerful advocacy tool. 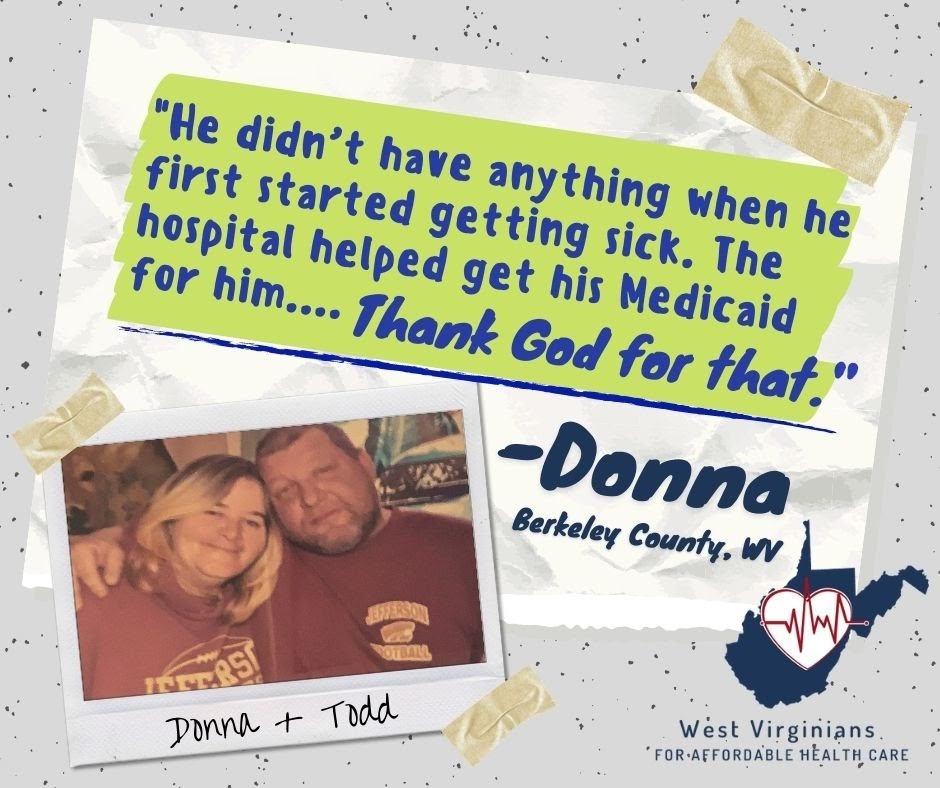 Donna is a City custodian and native resident of Berkeley County, where she lives with her longtime boyfriend and “partner in crime,” Todd. They’ve seen each other through a lot over the years:

Believe it or not we met in the church parking lot...I knew his son before I knew him because he was around my children. Then we used to party together. But we’ve stopped all that, we’re boring people now. We don’t drink…We just live our own little life.

In addition to her job with the City, Donna helps Todd manage his many chronic health conditions -- a full time job of its own. “Todd has cirrhosis of the liver, diabetes, COPD...he has high blood pressure. He’s had seizures. He’s in chronic pain all the time. Todd is a mess. I hate to say it like that, but he is,” she says.

Due to the chronic pain in his hip, Todd uses a wheelchair or a walker most of the time. They often travel as far as Morgantown for doctor’s appointments and physical therapy. Donna ensures he maintains “good numbers” by preparing each of his daily medications and timing their refills according to the rules of his insurance. But knowing he is alone while she’s at work makes her uneasy:

I hate leaving him here by himself, so I make sure his medicine is on the table, and stuff is down low enough to reach so we don’t have to worry about him falling…he’s got a phone with him. I tell him to keep it with him at all times, because you never know.

Donna has health problems of her own to manage, including Type 1 Diabetes. Her employer provides health insurance that covers most of her medical expenses, although finding in-network providers in their area and negotiating prescription drug costs can be a challenge.

Due to his chronic pain and limited mobility, Todd has been unable to work for several years. Being uninsured and unable to afford proper pain management for his hip out-of-pocket, he often turned to alcohol as a form of self-medication. This led to more severe problems with his liver and made it difficult to regulate his blood sugar and diabetes. Todd’s health continued to deteriorate until a staff member at a Morgantown emergency room flagged his patient file and submitted the application on his behalf for presumptive Medicaid eligibility:

He didn’t have anything [health insurance] when he first started getting sick. The hospital helped get his Medicaid for him….there was a little girl down in Human Resources. She did all the paperwork and got it to go through...Thank God for that.

Todd left the hospital with prescriptions that would have cost “five or six hundred dollars” without insurance. With Medicaid, Todd was finally able to afford medications he needed to improve his liver function, lower his blood pressure, and relieve some of the pain in his hip. Having access to this care reversed Todd’s trajectory and initiated a recovery journey that was strengthened even further by his decision to quit drinking. Donna recalls:

We were bringing him home [from the hospital] and we stopped at the store, “What do you want to drink?” I said. I figured it would be a beer.  He said, “No, I want a soda. I’m done. I’m not drinking any more.”  And he stuck to it...He’s been clean now for three years."

Getting sober allowed Todd to improve his A1C blood sugar levels so significantly that he was declared healthy enough to undergo hip replacement surgery in October of 2020--an operation that would have been medically impossible beforehand. Medicaid paid for the surgery and time in an inpatient rehabilitation facility afterwards.

Todd now gets support from Dr. Madison Humerick at Jefferson County Community Ministries, which serves low-income West Virginians in both Jefferson and Berkeley counties. He and Donna agree that Dr. Humerick was instrumental in preventing Todd from slipping down the path of opioid dependency after his surgery. Once released from the post-op rehabilitation facility, Dr. Humerick took over his care with a tough-love approach:

After he got home I think she wrote him one more ‘scrip. Then she said, ‘That’s it. He’s been without. He doesn't need ‘em. We’ll do something else.” That’s how we got rid of the pain pills--which is a plus because he was going down the wrong road with that.”

Together Donna and Todd have traveled all over the State of West Virginia and beyond seeking specialists to improve Todd’s quality-of-life. With the health care coverage provided by Medicaid, Todd is working on regaining the muscle in his hip so that he’ll soon be able to walk without the help of mobility aids. Gaining more mobility and independence would give Donna peace of mind while she’s at work.

In the meantime, Donna says she wishes they could get more hours and higher wages for home health workers that could stay with Todd during the day and help him with his medications and physical therapy:

Health care workers--giving them more hours of the day so the person who’s out working doesn’t have to worry as much. Then, there might only be an hour gap between a person coming home from work and somebody being there [with Todd]. That’s better than 3 or 4 hours of worrying about him being by himself.

Medicaid is a vital program that not only helps West Virginians with disabilities like Todd, but also supports their working family members, caregivers, and providers like Dr. Humerick.  By supporting programs like West Virginia Medicaid, we can improve and expand access to quality health care for individuals, families, and our community at large.

Giving tax breaks to corporations doesn't help working West Virginia families. We need corporations to once again pay their fair share in taxes as they did under President Reagan, both President Bushes, and President Clinton. Ask Senator Manchin to support corporate fair share taxes so our nation can invest in working families' success.