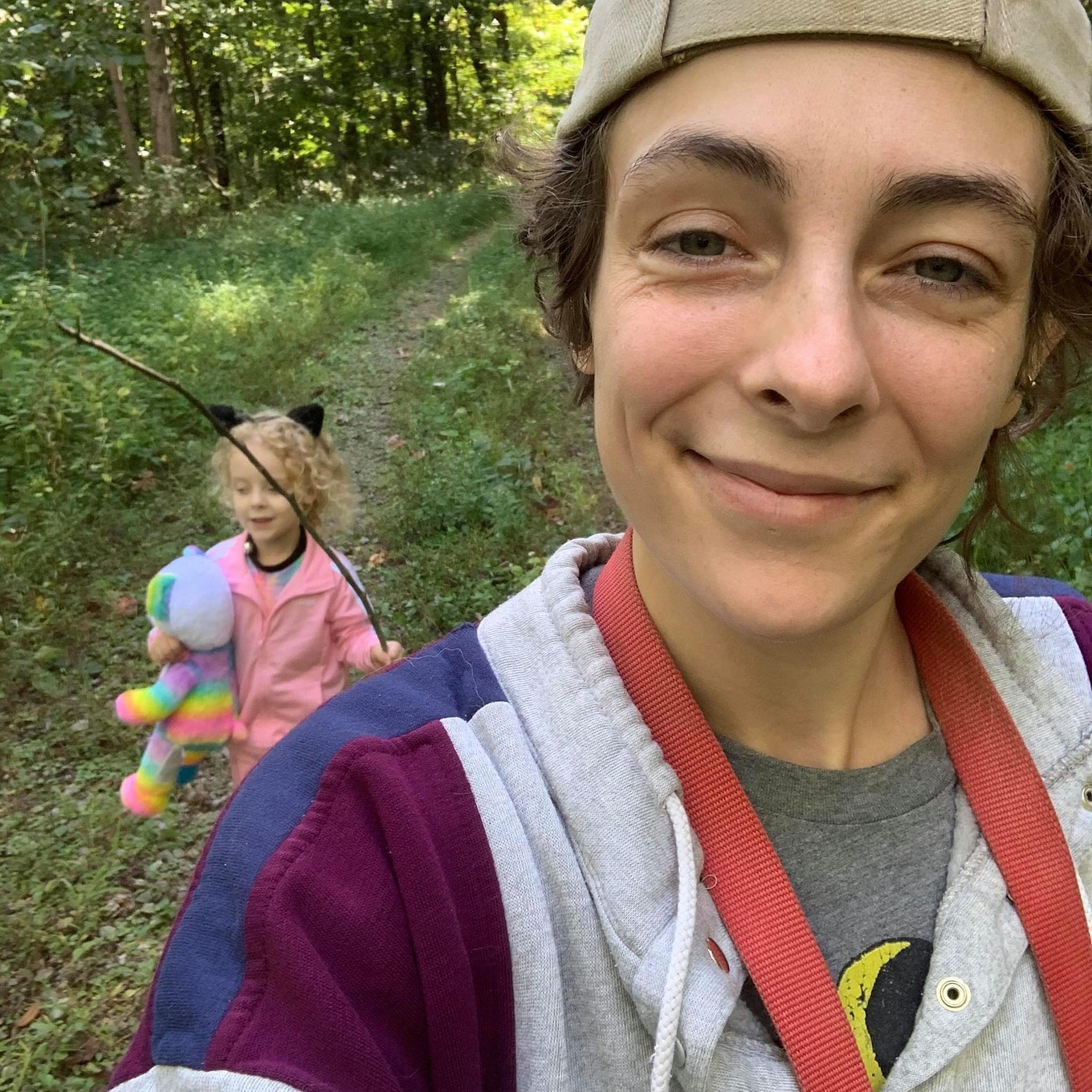 Hunter lives in Charleston, West Virginia, where they first got involved in advocacy work after college when they began volunteering for a local clean water group. This work eventually developed into a career in community organizing.

Hunter’s passion for community service is rooted in a deep appreciation for social safety net programs like public housing, SNAP, and Medicaid--all of which helped their family stay afloat during an occupational transition in 2017. At the time, Hunter’s data-entry job with the state provided health insurance benefits and was a stable source of income during their post-college years. Once their daughter PK was born however, finances shifted and Hunter found themselves spending more than half of every paycheck on childcare.

“When I became a parent I was in that really bad zone...I did have insurance, but day care would cost more than my rent. Day care would cost about 60% of my take home income, and I didn’t qualify for any kind of help.”

That’s when Hunter joined AmeriCorps, a program that connects volunteers with service organizations and helps to provide a living stipend to support their work in underserved communities.

“It came out to between five or six dollars an hour...But I was able to actually start a career in something I was passionate about.”

“It wasn’t until I was on Medicaid that I could even afford to see a therapist, to see a psychiatrist and actually get a diagnosis….10% of people who share my diagnosis will complete suicide. Since I’ve been on my medications and through this therapy program--that’s not something that I’m worried about anymore. And that’s hugely important for me, for my child, for my family...So literally--Medicaid saved my life.”

Today, Hunter has established themselves as a valuable community organizer with unique skills that are in high demand. This puts them in a difficult, but common position of having to turn down opportunities to make more money in order to maintain their income eligibility for Medicaid. This precarious financial situation is sometimes known as the "Medicaid Cliff".

This means that with each new opportunity for success, Hunter and other West Virginians living on the edge of the Medicaid Cliff must carefully budget the risk of over-earning and losing their health insurance. Often, the potential for additional income is temporary, and not enough to offset the cost of a marketplace insurance plan.

Hunter says they have had to turn down such opportunities from their current employer, which offered them a full-time position after the conclusion of their two-year AmeriCorps assignment.

“There was like a year’s period of time where they kept being like, ‘Oh well you could take more hours,’ and I’d be like, ‘Oh, but I can’t--I'll lose my Medicaid.”

One way of leveling this cliff would be to create a Medicaid Buy-In Program. This would be an affordable option to pay sliding-scale premiums for Medicaid if your income rises. Such a program would give many West Virginians, including early career professionals like Hunter, the freedom to explore new paths to success without the risk of losing their health insurance.

“Everyone deserves health care. And everyone having health care helps all of us! It keeps our health care costs lower and it keeps all of us in the community healthier. No one should have to suffer just because they can’t afford health care.”

Do you have a Medicaid Story to share? Contact [email protected] for more information on becoming a Medicaid storyteller.