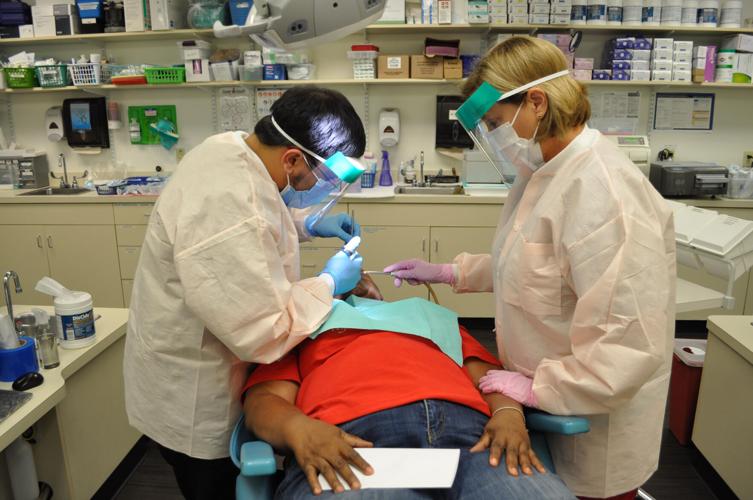 Webster Springs — Todd Farlow loves his job as the Webster County coordinator for the Family Resource Network, a statewide nonprofit tasked with meeting the needs of individual counties.

“It’s a great job,” he said. “It doesn’t pay well, like any other social work. But, of course, you get the reward that at the end of the day, you’ve helped somebody.”

But over the past few years, certain aspects of the job have become more challenging.

Because of Farlow’s deteriorating eyesight, he often doesn’t recognize community members until they are within a few feet of him. Once he figures out who the person is, his dental problems make him uncomfortable smiling at them.

“The biggest thing for me with my oral health, it’s embarrassing,” he said. “Constantly worried about smiling makes the job kind of difficult.”

Like more than 650,000 West Virginians and over half of Webster County residents, Farlow and his two children get health insurance through Medicaid, the federal insurance option for low-income Americans. While the state’s version of the program offers full dental and vision benefits for people under 21, it treats these services as ancillary for adults and puts strict limits on coverage.

These gaps have real health and workforce implications for West Virginians. But despite a 2020 legislative move to include some Medicaid dental coverage, lawmakers haven’t acted to harness free money that other states use to cover more of these services. This inaction means many are forced to choose between incurring expensive bills or ignoring important health problems.

It has placed Farlow in a situation in which he is tasked with educating Webster County residents about how to keep their teeth healthy, yet doesn’t have the insurance necessary to care for his own. He knows he’s not the only one in his community challenged by these gaps in coverage.

“I’m actually better off than a lot of people,” he said.

Glasses out of reach for many Farlow first developed astigmatism about a decade ago. But because West Virginia’s program does not cover his corrective lenses, he has opted for pairs of generic, less expensive glasses from a drug store. They last about three months before becoming scratched and foggy to a point where he can no longer see through them. Now, he just goes without.

West Virginia’s Medicaid adult vision program only covers eye exams that are part of larger wellness checks or considered medically necessary. It does not pay for glasses unless the recipient has had cataract surgery within the past 60 days.

Changing that would be up to state lawmakers, but nearly all of the cost would be picked up by the federal government.

When health care experts trace the repercussions from not providing Medicaid recipients with sufficient eye care, they find that, like in Farlow’s case, the consequences can bleed into other parts of life.

“Imagine trying to help your kids do homework, and you need a pair of glasses,” said Kat Stoll, the West Virginians for Affordable Health Care policy director. “But yet we want people on Medicaid to be good parents.”

A 2018 research study determined that recipients who had vision care were more likely than those who didn’t to hold full-time jobs and work longer hours.

Brandy Lipton, a UC Irvine public health associate professor and co-author of that study, said a reason that could explain the phenomenon is people with the additional coverage were more likely than their counterparts to drive to work.

“We think that could be one thing behind the additional hours,” Lipton said. “You don’t have to worry about catching public transportation at a certain time. You can just get in your car and go.”

In March 2020, the Legislature revised the insurance program to add additional coverage. When the change took effect in January 2021, it gave recipients up to $1,000 of coverage for services like cleanings, root canals and dentures.

After that, Farlow started scheduling regular dentist appointments, checkups he hadn’t been able to afford for about 15 years. But he quickly learned that his new dental insurance won’t go very far. His dentist told him that, in the near future, he will need a full set of bottom dentures and four top teeth replaced; he knows that type of procedure would far exceed $1,000.

“I don’t want to knock a gift,” Farlow said. “It’s wonderful, great to have it. [But] for the work I need, it’s not going to cover it in one year.”

Jonathan Hill, a dentist who co-runs a private practice in Hurricane, said that Farlow’s experience is typical of many Medicaid recipients he treats.

In its current form, the state’s Medicaid program forces him and his patients to make difficult choices about which health problems they can and can’t address.

“I have multiple examples where a patient has 12 cavities but also hasn’t had a cleaning in 10 years,” he said. “You just can’t do everything you want to do, and that happens actually quite frequently.”

Free clinics offer some coverage, but only to those who can access them

While some Medicaid patients seek out their annual $1,000 worth of care from private dentists like Hill, access to even that basic level of care is still an issue. Only about half of West Virginia’s 880-some dentists treated Medicaid patients last year, according to the state’s Board of Pharmacy and Bureau for Medical Services.

For those who can’t get care from a dentist, or need work that exceeds their benefit, free clinics can fill gaps in certain areas of the state.

In Clarksburg, Health Access sits on a hill above the city center, just within eyeshot of old brick buildings downtown.

“The idea in 1992 was … we’re going to take care of folks who are uninsured just for a short time until our government figures out what to do,” said Josh Brown, Health Access’s executive director. “Here we are 30 years later, and I don’t think we’re any closer today than we were in 1992.”

Every other Friday, that includes dental work. Roger Suter, a dentist who runs a nearby practice, treats patients for as much work as they need without the fear that they’ll leave the clinic with a bill.

Suter wants to do what he can to make sure everyone can take care of their dental health. and it’s not just for aesthetic reasons: Oral hygiene can have physical health implications beyond one’s mouth.

“Periodontal disease really is the silent killer,” he said. “The bacteria from the infections can go everywhere.”

For eye care, Health Access partners with the West Virginia University School of Medicine initiative Appalachian Vision Outreach Program. A few times a year, the program runs a full day of free, comprehensive eye examinations for West Virginians without vision insurance. In addition to screening for diseases like glaucoma, the initiative provides patients with prescription glasses for $20-$30, depending on their income.

“It makes a huge difference,” Brown said of the program. “Not only are they able to see, but also in their self-esteem, being able to secure gainful employment and just feel good about themselves.”

While these clinics ensure that Medicaid patients are not left with hefty dental and vision care out-of-pocket fees, Brown realizes they can only help people who have the time, resources and locality to get to their locations. In addition, the health centers can only treat so many people in a state where over a third of residents use Medicaid.

“What about Ritchie County?” he asked. “What about Doddridge? What keeps me up at night is there’s a safety net for some, but it’s a small safety net.”

If the West Virginia’s Legislature expanded dental and vision coverage, the state would only pay a fraction of the costs. A national fund called the Federal Medical Assistance Program would finance the majority of the expansion; West Virginia would pay less than a fifth of the cost.

Enhanced coverage would also aid free clinics like Health Access. If the facilities were fully reimbursed for their dental and vision work, they would have more discretionary money to address other urgent health needs in their counties.

During the 2022 regular legislative session, Sen. Ron Stollings, D-Boone, co-sponsored a bill that would have increased the Medicaid dental insurance coverage to $1,500. A co-sponsor of the initial expansion legislation, he said the $1,000 cap was set to appease conservative lawmakers.

In his view, the first bill was necessary but insufficient.

“Frankly, it’s not enough to really keep people from having oral health problems,” Stollings said. “It’s a bite of the apple, a step in the right direction.”

He sees both dental and vision care as crucial for developing West Virginia’s workforce.

The 2022 bill didn’t even get a hearing in the Senate Health and Human Resources committee. The committee’s chair, Sen. Mike Maroney, R-Marshall, did not respond to multiple phone calls and email requests to discuss the proposal. When reached by phone, Maroney’s House counterpart — Delegate Matthew Rohrbach, R-Cabell, said he was too busy treating patients as a doctor to comment on dental and vision benefits for Medicaid recipients.

In the meantime, Farlow will continue to do what he can to meet his community’s needs.

When he heard about the vision care event at Clarksburg’s Health Access, he immediately started thinking about how Family Resource Network could help Webster County residents attend.

While they have full coverage now, he knows firsthand how difficult it might be for them to access adulthood care. He never wants them to face the same health care obstacles he has.

“My mom was on me too, and I didn’t take care of them the way I should have and needed to.”

This story was originally published by Mountain State Spotlight. Get stories like this delivered to your email inbox once a week; sign up for the free newsletter at https://mountainstatespotlight.org/newsletter